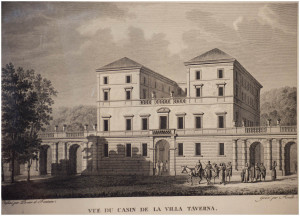 In the late sixteenth and early seventeenth century families that were linked to the papal court built twelve great villas in the Alban Hills.  Villa Parisi, in Monte Porzio Catone, near Frascati, is one of the remaining villas and was built in 1603 by Monsignor Ferrante Taverna. Taverna belonged to a prestigious family from Milan and was at the time the Governor of Rome and appointed Cardinal under Pope Clement VIII. 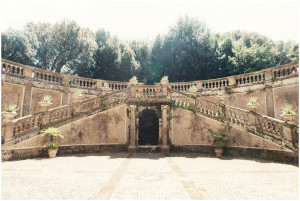 Cardinal Taverna commissioned the well known architect of the period, Girolamo Rainaldi, who designed the original building comprising ground floor, first floor and two upper floors. In 1614 Cardinal Scipione Borghese, nephew of Pope Paul V, bought the Villa and began a series of projects, including the construction of two wings to the south. Flemish architect Giovanni Vasanzio designed the “Theatre of the waters” in which two flights of curved stairs frame a fountain, hidden in an artificial cave which is the refuge of a carved dragon, the coat of arms of the Borghese family.  In the secret garden, to the east, Vasanzio also designed an octagonal fountain, a monumental portal connecting the Villa with the park behind.

In 1729 Camillo Borghese, IV Prince of Sulmona, together with his wife Agnese Borghese Colonna began a new series of internal and external landscaping projects. The well-known brothers Giuseppe and Domenico Valeriani decorated the main hall and the adjacent “Four Seasons” room. Ignatius Heldmann decorated several galleries with landscapes of the Alban hills.  The ornate decoration of the chapel and the living room of the hunt were commissioned for the visit of Pope Benedict XIV taking place in 1741.

During this period there was also external rearrangement to the front of the Villa. These changes were done in 1751 by Mario Asprucci.  Other painters who decorated the interiors of the Villa in the second half of the eighteenth century were Thaddeus Kuntze and Giovan Battista Marchetti.

In 1803 Paolina Bonaparte, the sister of Napoleon, married Camillo Borghese. They both lived in the Villa partially due to its proximity to the Villa Rufinella where the other brother Luciano Bonaparte was living during his archaeological excavations of Tusculum.

In 1896 the Villa and park was bought by Saverio Parisi, whose descendants still own it today. Between 1920 and 1930 Enrico Parisi, son of Saverio, and his wife Elena Serra di Cassano enhanced the interior, modernized the villa and restored the frescoes.